We had spent the morning with our group, being guided through the Call, the medieval Jewish quarter in Barcelona. It had not been a ghetto. Jews were allowed in and out. But most stayed in. It had been the men with business that went out into the larger community during the day. The rest weren’t compelled to stay confined but they chose to. For their safety. 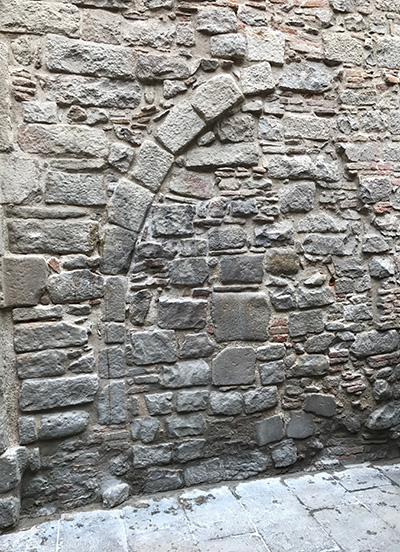 The walls of the synagogue we visited date back to the 3rd or 4th century. The first records of a Jewish community in Barcelona date back to the 11th century and the synagogue itself is considered by many to be the oldest in Europe. In exchange for taxes, the Jews enjoyed the protection of the King. But in 1391, when the King was away, much of the population was killed or fled. By that time, they had numbered 4000 and were crammed into the narrow passageways of the Call. Those that remained after that date were expelled during the Inquisition of 1492.

The Synagogue had been deserted for centuries and was used for other purposes. But the son of an Argentinian Jew who fought in the Spanish Civil War returned to Barcelona and made it his mission to recover and restore these old rooms.

The old structure had been built upon. When we went through the low hung doorway we descended into a half submerged stone room whose upper windows just reached to the street above. Although the space had been abandoned and repurposed and no current congregation exists, there is a presence that is felt. The ghosts of those slaughtered medieval Jews seem embedded in the aged stone wall.

When a Jew prays, he and now she, wraps herself in a tallit, a woolen, linen or silken shawl that serves to protect. I felt the space inside these ancient stone walls as a tallit. It held me in its embrace and promised perseverance and hope. I was a little stunned as my heart beat and tears came to my eyes. 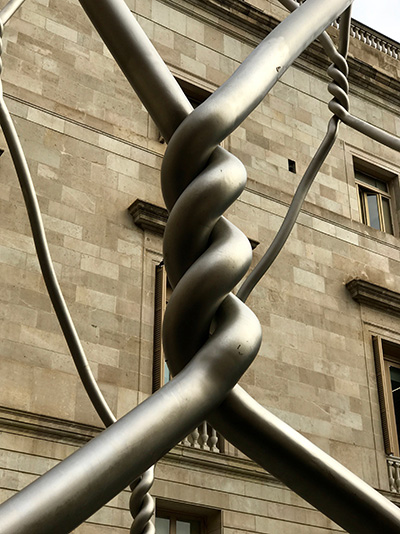 At morning’s end, Bernie and I parted from the group and chose to retrace the steps we had taken earlier in the day. There is a way to experience a space on your own that differs from the way it is felt when filtered through the collected beings of a group.

As we walked I glanced through a narrow space I hadn’t seen before, between slightly distant buildings. Following our nose, we stepped into a plaza where twisted strands of Nguyen steel formed a sudden triangle that climbed several stories high. And the title read in Catalan, Homentage als Castellers, Tribute to the Towers. We puzzled around the base. A list of names, Catalan names, were inscribed. Having become accustomed to public art, we made up a story. These were the names of Catalan people who had died on 9/11 and this was a memorial to them. We paused, breathed in the moment and continued.

When you travel, you set out an agenda for the day but if you are open to it, the city itself alters your plans. We found ourselves slowed, moving through the streets as if we were wading through a viscous stream. Never making our final destination for lunch we began looking for something closer at hand. We were pulled to the old eatery on the corner with chickens on the spit turning in the window. We entered through the bar and the kitchen. Past cast iron griddles and ovens whose heat embraced us, we threaded our way through a narrow passage towards 19th century dining rooms, appointed with polished wood and richly hued Moroccan tiles. Vegetable cannelloni and two delicately fried eggs wrapped around shoestring potatoes was the meal we ate. Perfect.

We headed back in the direction of our morning’s explorations, as just the other side of the Call sits the great Cathedral of Barcelona. We wanted to climb to the roof and get a view of the city. Along the way we learned two things. 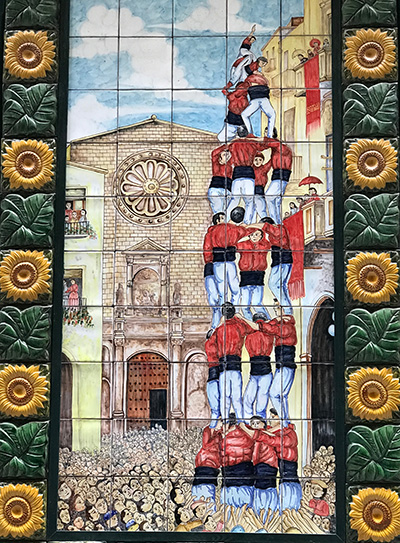 We had been wrong about the Towers. As we moved through the shops we began to notice images of the Towers being referred to with local pride. The Towers were human towers. It was a festive practice dating back to 1700. Human towers, where the man at the apex raises four fingers above his head to symbolize the stripes on the Catalan flag. The name of those we thought deceased were in fact the members of the local winning team. Oh.

And moving closer to the Cathedral we passed the spot where earlier in the day we had noticed Hebrew letters embedded on the walls behind the great Cathedral. We had felt a sense of identity. Here were artifacts of culture. But what we learned was that these stones were not a commemoration but had been dragged from a decimated cemetery centuries ago to be used in construction.

There are different ways of knowing. We had been missing some vital facts and so misread the signs based on our own interpretation. But we were fascinated and happy to learn the truth.

What we learned sitting in the old abandoned synagogue is open to interpretation. For just a moment that morning we communicated with the spirit of long ago. It was visceral and filtered through our own ephemeral existence. But then, how else does one communicate with the dead?