In the north of Spain, facing the Bay of Biscay is a town that reinvented itself in the face of economic ruin. Bilbao had been an old industrial town engaged in shipbuilding and iron production. When those industries began to fade, the town decided to find a way out. They were looking for something to reinvigorate the economy and support them in the 21st century. Through much negotiation and machination they paired themselves with the Guggenheim Foundation who sought a new venue for 20th century art.

Frank Gehry was brought in as architect and soundly rejected the site that was originally chosen for the museum. He had a vision of a museum on the water that would revitalize the deserted docks and abandoned buildings. A phoenix rising from the ashes. It would cost $200 million dollars. The city would put up the money. The Guggenheim would supply the architect and the art.

It was not an easy deal to make. But the city planners had enough vision to take the risk. The gamble paid off. The titanium vision that is a boat, that is a fish, that is a museum, captured the imagination of the world. It is the anchor for what has become a transformation not only of a town but an entire region. 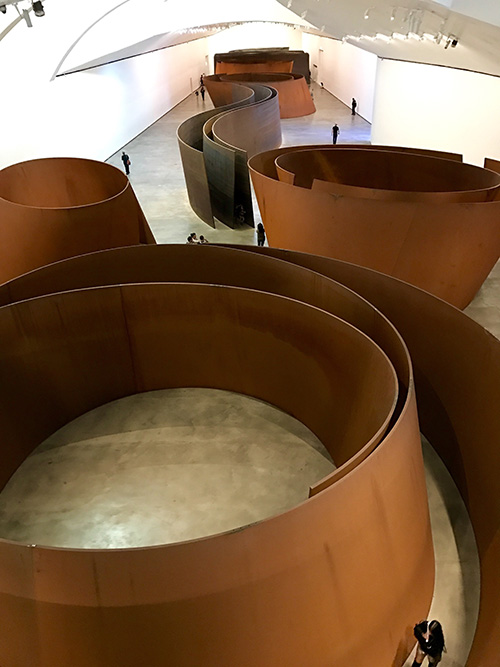 In the basement floor of the Guggenheim museum there is housed a massive installation. A Matter of Time consists of eight enormous works by the artist Richard Serra. Tons upon tons of massive steel leans and curves and forms an ongoing maze. The steel is rusted and exhibits a beautiful burnt orange hue. The twirling intertwining pieces stand 20 feet high and are anchored to the ground by their size. To touch them is to feel something cool and smooth and reassuring.

Serra has said the pieces are designed to be a Zen garden. He encourages visitors to consider walking amongst them as a meditation. And to know that emptiness is as important as matter. That light is important to equilibrium.

Walking in between the leaning curving walls brought me to my childhood. I grew up on a hill in Worcester a city central Massachusetts. Like Bilbao, Worcester is an old industrial town long subject to decay. Our house was on the upward leaning side of a steep street. The only thing that kept the house above us from falling onto our driveway was an eight-foot high retaining wall. For as long as I can remember this wall was a problem. Like Worcester itself, the wall was frequently in need of repair, always leaning menacingly over the car as we drove the incline up to the garage.

My dad had it fixed once or twice, but gravity and snow and ice always won out and soon it would begin to lean in again. I can hear my dads’ laugh, a little nasal and can see the shake of his shoulders, as he shrugged it off. This from a man who had put the roofs on some of the biggest churches and businesses in Worcester. I can still see the twinkle in his eye as his gaze sought yours and the slightly crooked tilt of his lips when he smiled, reassuring you all would be well.

My dad is gone now and one day the retaining wall too will begin to fail. Until that time, like the city of Bilbao, it stands as a testament to perseverance or perhaps faith.

My 94-year-old mom still lives in the house. Recently we had workmen out to address the crumbling stucco on the north exterior side of the house. They saw the retaining wall along the driveway and gave it wide girth.

Impermanence looms. But the strength and certainty of the Serra sculpture grounds me in the enduring power of a fathers’ love.

This was my meditation that day. This is the power of art!