P’uy L’Évêque had always been the impetus for this trip. A number of years ago friends of ours, one British, one Californian decided to retire there with their twin sons, then 6 years old. For all these years I had been wanting to visit but various life problems got in the way. And now that their sons were entering middle school they would be moving back to the states. We had one more chance. Although their move was already underway, they were holding onto the house for another year. And we were welcome to stay whether they were there or not. 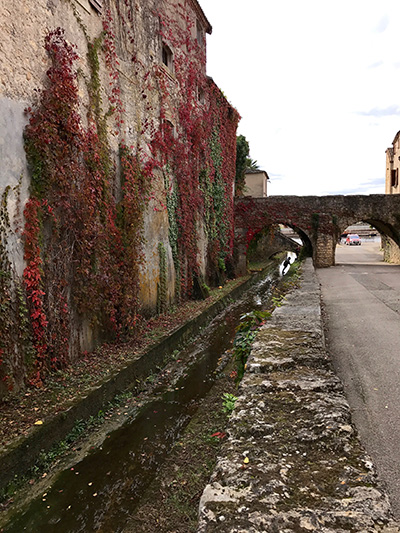 P’uy L’Évêque or Bishop’s Hill sits snuggly nestled on steeply rising banks along the Lot River as it meanders through the region known as the Midi-Pyrenees. The region sits just north of the Pyrénées mountains and France’s border with Spain.

Because we had lingered too long earlier in the day we once again were arriving into town after dark. Looking for Place du Rampeau, we passed it several times before realizing our friends’ address was not situated on a street but in fact on a Place. And that one had to jump the curb in order to enter.

We found it only because John, realizing how late we were, had left the house and waved us down as we passed the Place for the third time.

Their home, just like the town, was more vertical than horizontal. From la Place we opened a creaky metal gate and descended a crumbling flight of moss covered stone steps to enter the house on the top floor. The kitchen, living room, dining room combination looked out over the rooftops, down to the river and across the valley to the vineyards and slopping hillsides beyond. The windows opened like French doors and we could reach through them to close the red wooden shutters that kept out the evening cold and morning light.

After blowing out the fuse box the first night by turning on too many space heaters at once, I began to understand the peculiarities of this renovated medieval structure. Descending a stone spiral staircase took us down one flight to 1 and a half bedrooms and a small bath. One had to be careful to hold onto the railing on the left as you began your descent and then switch your balance to the right side wall at the bottom.

There was a third level down that took you to the basement and the old entrance to the house that opened out onto what remained of an ancient Roman road. 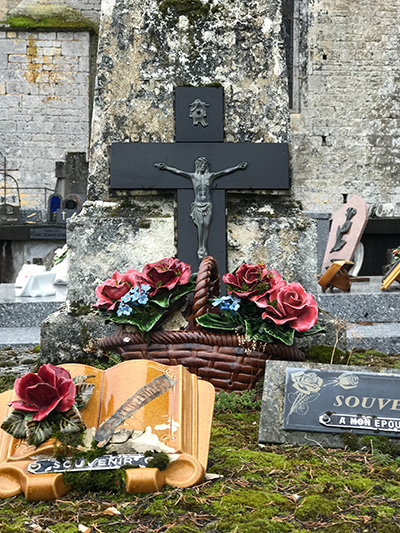 P’uy L’Évêque became our hub for 5 days and 6 nights. We traveled north to Sarlat, Chateâu des Milandes and Saint Cirq Lapopie. We went east to the caves at Pêche Merle, but never managed to go west to Bordeaux. We explored the 14th century cemetery in P’uy L’Évêque where lichen covered family graves are colorfully decorated with multi hued porcelain flowers and spent an entire Sunday getting our wash done at the only laundromat in a 5 mile radius.

When it was time to leave we were sad but happy we had finally come to see the river Lot. We packed our bags, lugged them up the stone steps and set out for our next destination. We were nearing the end of our time in France and all departures and arrivals were tightly scheduled now.

We pulled into the gas station at Praysac, the next town over. We had been getting very good mileage with our Euro car rental and this was only the second time we would have to fill her up. The first time had been just outside the Château at Chaumont. We had made quite a spectacle of ourselves that time. An impatient French woman with school children in the back seat waited behind us we struggled with the manual to figure out where the gas tank was and which of the proffered varieties of gas was the one we wanted. Despite her now vocal protestations, we figured out that we needed Diesel and that #95 was the one for us. I knew enough French that when we went inside to pay I could tell the cashier and harried mother were having a good laugh at our expense.

So when we pulled up to the tank in Praysac, Bernie jumped confidently out of the car and reached for the pump labeled #95. We filled her up and started the engine. Moving forward we lurched from the station and onto the road. I knew instantly something was wrong. Now this is one of those moments when you travel where you have a choice. To blame the man sitting next to you in the front seat or to gently suggest that something might be wrong. For the first mile Bern insisted he had put in the right gas and that it was just a coincidence we felt like we were riding a bucking bronco out of town. But I knew it wasn’t right and since I was behind the wheel I made a unilateral decision to return to the scene of the crime and find out what had gone wrong.

Sure enough we had put regular gas into our Diesel engine. The horror stricken face of the attendant who gave us this news clued us in immediately on the severity of our mistake. She gave us a list of three car shops in the area that might be able to help.

As we headed for the one in the center of town, Bernie was busily Googling our problem and coming up with some alarming results. Remarks such as “Stop driving immediately” and “don’t even turn the key in the ignition” had us worried. By the time we read the entry that began “When we put regular gas in our Diesel engine it took $8000 to solve the problem,” we had arrived at our destination. It was just noon. But of course, being France they were ‘Closed for lunch.’ For two hours. 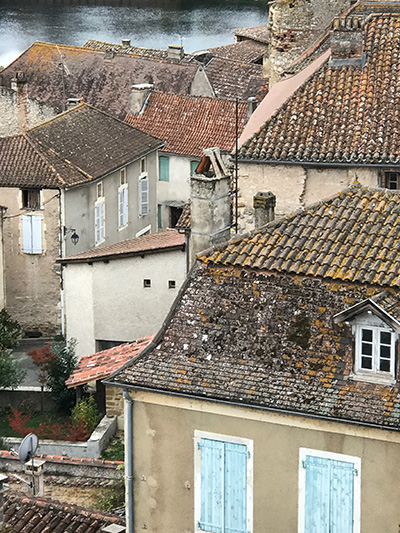 We made a quick decision and decided to head back to P’uy L’Évêque and seek assistance from our friends. They weren’t easily found. We realized once we made it to the house that we weren’t to drive it another foot, and waited for them to return. My husband is a gentle man but I thought to myself how happy I was it was he who put the gas in the tank and not the other way around.

As it turned out our friends had a wonderful mechanic, straight out of a Truffaut film, who found our situation quite amusing. He came with a tow truck to carry the car the last mile to his garage and could tell precisely how far we had driven with the wrong fuel by the amount of damage to the engine. I think we were saved by the fact that we still had half a tank of Diesel in the car before we added the leaded fuel. Otherwise the engine would have seized.

We had plenty of time that afternoon to say a second good bye to P’uy L’Évêque, a chance one doesn’t often get. By the end of the afternoon the car was ready. The kindly mechanic had completely drained the tank and cleaned out other parts of the engine that may have been compromised. He promised us we were good to go and very lucky. It cost us 200 Euro. We felt we got away cheap. It wasn’t $8000. And ultimately we were able to return a fully functioning car to the rental agency. The rental had originally seemed remarkably cheap. This brought it up to market price.

As we left town I couldn’t help but feel what I often felt on that trip, that we traveled in a state of grace and that the trip I had long wanted to take was unfolding just as it should. And once again that night, we reached our destination after dark.