Although we had sworn we would do no night driving, it was well after nine in the evening when we approached the lodging we had reserved for the night at a refurbished Château. Slightly outside of town, it would ultimately be a wonderful location, but on that night we were forced to travel down dark unlit country roads, finding our way by whatever our headlamps chose to illuminate.

Our room was not in the Château proper. It was opposite the old Château in what I can only assume had been the stables now converted to bring in additional income. The room was simple but spacious. After traveling from Versailles and spending a night in Chartres, we were so happy to finally be stopping more than one night in the same place. 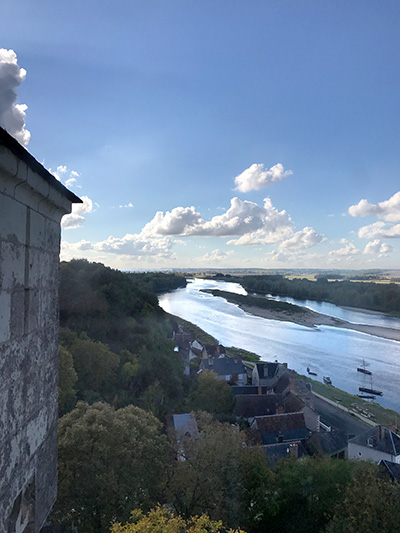 The part of the Loire River we overlooked was broad and slow moving. Up river near Blois, where we found ourselves later in the week, it was deeper, wider and faster. But where we were, just outside Amboise, it seemed as though you could see the sandy bottom and perhaps the hollowed out tree trunks Neanderthal peoples once used to navigate this region. Just weeks ago Amboise had only been a dot on a map, recommended by a friend. Now it was fleshed out in color, by the angle of the sun, the smell and texture of the air, the sounds of its people and the facts of daily life.

We slept well. The next day was Sunday and we began our explorations of the Loire valley right in Amboise. We drove the short distance into town and found a 5K foot race was well underway. The blare from the loud speakers and assembled crowds drove us from the town center. We walked the road that hugged the old fortification walls of the city, heading for Clos Luce, where Leonardo da Vinci, invited by the King of France, lived for the last 3 years of his life. Before going in we stopped for lunch, in what can only be called a joint with outdoor tables. It sat perched on a hill on the edge of the road facing back towards town. We joined the locals as they cheered the foot race intermittently running past us into town. As with all meals in France, even at a joint, it was a lengthy process.

As we waited for our simple lunch to arrive I got up to use the bathroom. I wound my way through the interior of the establishment. It was dark and dimly lit and the echo of countless nights of raucous carousing seemed to hang silently in the quiet afternoon air. I opened the bathroom door and stepped back centuries as I entered the room. The bathroom was built directly into the old fortification wall we had been following, a fortification wall that had crumbled and sunk into the earth from which it was built. The beautifully appointed room felt as much like a cave as a manmade artifact. Perhaps it was one of the Granaries of Caesar, caves used to store grain during the Gallic Wars.

Wandering back out into the daylight I thought of the night before when we had eaten at the Château. It was the priciest meal of our trip. This afternoon we were eating what proved to be the simplest fare of our journey, slightly better than MacDonald’s. Surprisingly, I can’t say I enjoyed the one more than the other. The food at the Château was of course better, but not as sumptuous as we might have expected. We grew impatient with the pomp. Manners clearly set ages ago to create unease if you didn’t know the rules. And although the amuse bouche, the cheese and dessert were exceptional, the main course was overcooked and tough. Our lunch that spanned the centuries from the cave-like bathroom to cross country foot race proved far more enjoyable. The night before we were cloistered. This afternoon we were carried along side the river, breathing in the town from the heights of the castle walls and the depths of its foundations. The day was fair, the people turned out to cheer on the runners, the proprietors friendly and the very fine wine was cheap.

Having spent more time then intended at lunch, we had to choose between exploring the castle or Leonardo’s house. These are the sorts of hard choices one faces in travel. We chose the castle. Good choice. They were all good choices. And once again our ignorance was laid before us. Little did we know that Leonardo’s tomb was situated on the castle grounds. A beautiful miniature castle within a castle, filled with lilies that perfumed the air. It was here that I came to understand that the flower in fleur de lis was the Lily. Of course. So we got some of Leonardo after all. 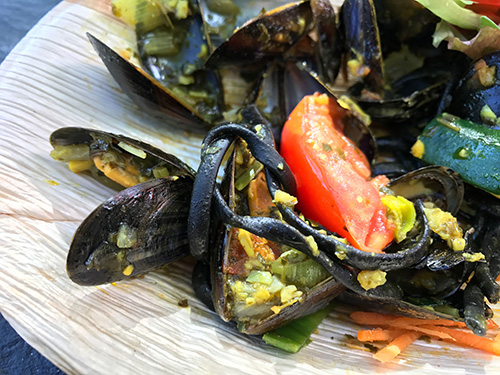 Lunchrooms at each Château proved more surprising than the one before. Food in France satisfies, the palate, the appetite, the soul. And each chef, no matter how humble the establishment, rushed to please. Clearly taking pride in their work. The meals I most enjoyed on our travels were sometimes the simplest ones of all. The black squid pasta with mussels and fresh tomatos, leeks and a bit of saffron. A delicata squash stuffed with cheese, tomatoes and a pepper relish, embellished with a side of ratatouille, couscous and a salad. A simple side of chicken, grilled to perfection served with pomme de terre, paired with wine and a marzipan, toasted pine nut dessert.

Our days in the Valley of the Kings were sun kissed and crisp. October proved the ideal month to wander in and out of ruined château. Some deserted and empty. Some revitalized, housing amazing 20th century art inside and out.

Our last stop before leaving the valley was the Château de Chenonceau. In the 16th century this exquisite château was given as a gift from Henri II to his mistress and great love Diane de Poitier. The castle spans the Cher river, a tributary of the Loire. It is fully furnished and appointed and easily encourages a visitors’ flight of fancy.

Bernie and I knew little of French history. It was sheer luck that led our wanderings from one Château to another. From the hundreds of châteaux along the Loire the few we visited were all amazingly intertwined by their histories and the intrigues of courtly love.

King Henri II had been married at age 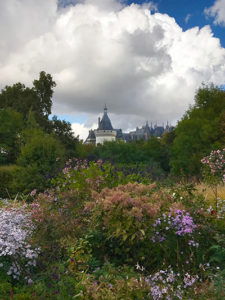 14 to Catherine de Medici from Italy, 14 as well. The story goes that his father, King Francois I, sat in on the young couples wedding night nuptials. It was a political marriage and Francis wanted to make sure they could consummate the deal. Both reportedly performed admirably well. However, Henri, who had lost his mother at a young age, was already having an affair with his cousin, Diane de Poitier, 20 years his senior and a favorite of the court.

Each piece of this story was a revelation to us and unfolded in pieces as we first visited the castle owned by Catherine and later the one Henri gave to Diane. Upon Henri’s death, Catherine, now queen, quickly pressed Diane to swap châteaux and so got the coveted Château Chenonceau for herself.

Chenonceau was our last stop before we left the valley. We had a long drive ahead of us and thought to stop in the château lunchroom to grab a sandwich for the road. But as had happened so many times before, we entered and were ensnared by the bounty laid out before us. Almost at once, we both eyed the most magnificent looking quiche. It stood what seemed to be 8 inches high, made of eggs and cream, potatoes and cheese. One couldn’t take this beauty on the road. It needed to be warmed and placed upon a plate. Enjoyed with a good cup of French coffee and a crusty roll. We had arrived in the Loire valley in the dark, we would arrive that evening at our next destination in the dark as well. It was worth it, to afford ourselves the luxuries of travel; to sit and pay attention, to the food, to the warmth of the café and the comfort of the heavy wooden chairs upon which we sat, to eavesdrop on the table next to us whose conversation wandered in and out of French and English and a little bit of German. To sit and let Chenonceau’s tale sink in just a little bit deeper.