Traveling opens you up. Being in the moment is your only responsibility. It asks of you to look and listen, smell and taste. To know the place you visit with your senses as well as your thoughts. And by doing this you grow, many times in ways unexpected.

I have hesitated to put pen to paper, to codify and shape and frame my experience. Right now, if I close my eyes memories waft up on fibrous streams of air, like a tempting smell from a late afternoon kitchen that taunts my nose.

I’ve come to realize there is a fine balance. The longer I take to write them down, the fainter the images become. Daily life floods in, seeping between the molecules of memory, replacing and bending them, pushing them further away. Bumping up against realty, the aromas begins to fade.

So let me for a moment try… 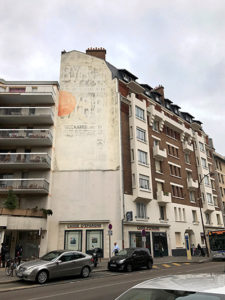 Still today my left foot reaches for the clutch. We had rented a cute little Hyundai. We found it sitting in what seemed to be an unattended lot just off of the grungiest street we visited in France. We had picked up the keys at the office in Versailles, across from what can only be called the French equivalent of a 7-11. The attendant there was very kind about our using the bathroom and I did note that fast food in France is still head and shoulders above what we’d find here in the States. It had been a rainy cold overnight stay there and Versailles seemed a bit flat to us after Paris. We were happy to find the car and be on our way.

I hadn’t driven a standard shift in 30 years. It had originally been a point of pride for me to learn when I was once ridiculed for being a typical woman who ‘didn’t know how to drive.’ I was a little nervous. But it came back to me in a flash. And I loved it. I loved driving in France despite the fact that the French hover on your tail no matter what speed you are driving. Driving in France was a way for someone who is not fluent in the language to have a conversation with the local people. Like music, driving is a universal language.

We headed out of town through pretty heavy traffic. Trial by fire. But by the time we were on the road to Chartres I was feeling fine. For the next two weeks I got to careen along the country roads of France. Not enough of them I might say. I would have been happy to trace every crooked line the map displayed. 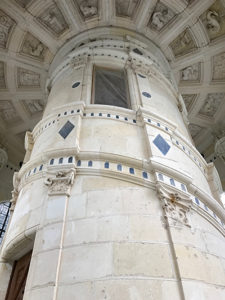 October is a beautiful time to traverse the countryside. We drove south to the Loire river going as far east as Château de Chambord, whose massive central stairway is believed to have been designed by Leonardo da Vinci shortly before his death, and as far west as Amboise. We hovered high above the Loire River, designated by Unesco as the last wild river in Europe. It was expansive and wildly reflective. Deep and wide and fast in part; in others shallow and slow.

We discovered that French roadside rest stops were worlds unto themselves. Wonderful places to shop for fine chocolate and warm sweaters, the food as always appealing and nourishing and tasty. We drove through countless small towns, many of which seemed uninhabited. Life it can only be assumed, takes place inside the walls.

Leaving the Loire valley, we drove south on the A20, departing Château de Chenonceau around 4, hours behind schedule. We had a 5 hour journey ahead of us. It was the longest stretch of highway road we were to do on our trip. It had been our intention to make P’uy L’Éveque, an old medieval town on the River Lot, by sun fall. This was clearly not going to happen.

The road had been described to me as a boring stretch. I imagined the flat empty feed lots of Colorado, but the countryside was heavily wooded and the drive was pleasant. 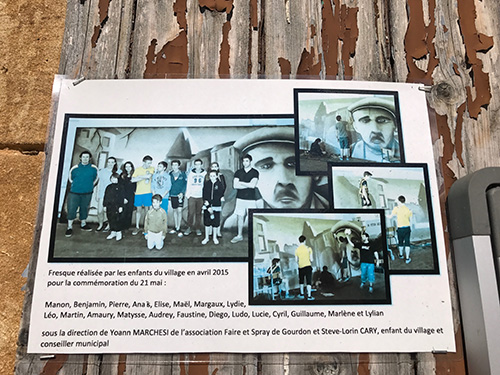 About half way there, day had given way to evening, Bernie had fallen asleep on the seat beside me, and the hills on either side of the road came closer. My mind began to wander and as was often the case on this trip, thoughts of WWII began to surface. Being Jewish in Europe, the horrific events of the 20th century never seem too far away. I began to imagine German soldiers hiding behind those trees or marching boldly onto the road, stopping cars with rifles held high. And as I did the car rounded a corner, and a roadside sign declared the exit. It was for Oradour sur Glane, a memorial of a Nazi war atrocity. I had been told about this village left intact as it was the day the Nazis burned it to the ground. It was chilling that I had somehow intuited our proximity to this memorial.

Although we didn’t have time to visit Oradour sur Glane, days later on a country road north of P’uy L’Éveque, we were compelled to stop. We were heading north to Château des Milandes, the former country residence of the American transplanted entertainer Josephine Baker, herself a member of the French Resistance. As the road curved through the center of Frayssinet-le-Gélat, a small French town in Midi-Pyrénées, we were stunned by the mural that confronted us. Prominently placed at the town’s crossroads, across the street from the old town church, in sepia tones, the saddened face of a French peasant stared us down. “Souviens toi et n’oublie pas…” “always remember and never forget” was written in lower case script across its center. Surprisingly, the children of the village had completed this mural the previous year, in 2015. It was drawn to commemorate the events of Sunday May 21, 1944 when the Nazis, the same group of Nazis that burned Oradour sur Glane to the ground, slaughtered 15 from the local village. It seems the war is not so far away for anyone living in France. 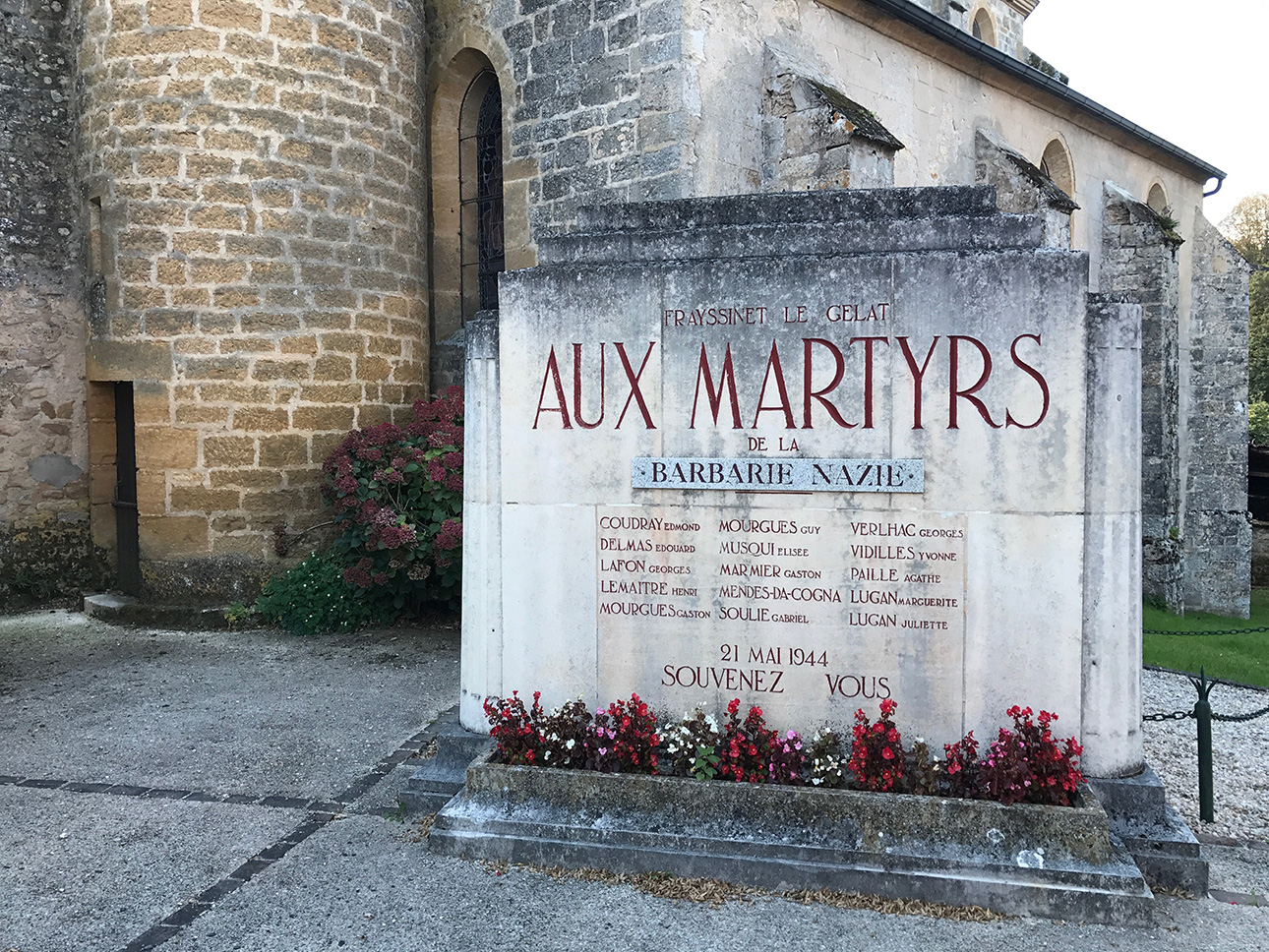 So many winding roads, so many times of day and shades of light. October was a little chilly but the sun was warm, the Mediterranean climate that often reminded me of home.

I have to say digital technology often eased our way. Bernie became expert at using Trip Advisor and found us some fabulous places to eat. Navigating became an art form and we anointed me a genius on the day I realized we could plug into the USB port hidden behind the car radio and no longer worry about running down the battery charge on our phone.

It was on that day, when we plugged the iphone in, that we also realized we were traveling with a sound system. Until that moment, we had been content exploring French radio. Happily discovering jazz stations. It is France after all.

I didn’t have a lot of music on my phone but I did have the album Grace by Jeff Buckley, a musician who died way too young in an accidental drowning and who I learned of through our son. We let the album play, and when Bernie fell asleep I let it play a second time. It is a strange mixture of music, some original some not but somehow perfect for the road.

Track six sits there like all the others. But it is not like all the others. It is a cover. One that languished in obscurity until a 9/11 tribute video, four years after Buckley’s death. Leonard Cohen’s Hallelujah has been covered over 300 times and evokes a multitude of interpretations but none more heart felt than this.

That day the sky was overcast with billowing clouds that looked like they just might rain. The track begins with a sigh. Then Buckley deafly plucks the strings of the guitar as if they were a harp. His angelic voice lifts to the heavens and the song soars in a lament and a prayer. As if on cue the sun‘s rays pierced the clouds and the beams filtering through seemed to announce heaven’s approval on the earth. It was one of those magic moments on the road.

Leonard Cohen’s Hallelujah became a major piece for the soundtrack of our Gallic travels. And although Buckley was not appreciated during his lifetime, France had embraced him and we ran into his music repeatedly on the radio as well.

Leonard Cohen died November 7, 2016, shortly after we returned to the states. The morning after his death, as I sat at breakfast a friend sent me a link to Cohen’s iconic song. I clicked on it. And as I lifted the coffee to my lips, the first chords of Buckley’s rendition poured forth. It didn’t take much. There I was, driving that country road amongst the fields and the sheep and the occasional solitary farmhouse, lifting my eyes heavenward to the sunlit stormy clouds, floating on a wisp of air, a memory I hope I hold forever.