It was our last full day in Paris. We made it full. Given that we had a museum pass which had not earned it’s keep, and given that I had neglected to photograph my favorite Van Gogh painting, we took the luxury of heading back to the Musée d’Orsay for the second time in 5 days. I was beginning to realize I often didn’t photograph the paintings that held my gaze the longest. Standing in front of some remarkable paintings, I would pause longer to feel their hue upon my face as one feels the sun on a summer’s day, bathing in their light. Consciously choosing not to click. As if the click would mar the moment. 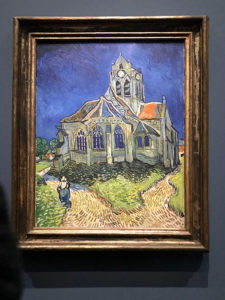 Pushed up against a wall, I’d have to say I came all the way back to Paris to see this painting, the Church at Auvers, painted by Vincent Van Gogh in. This dancing church set against the bluest sky, perched at the intersection of two undulating amber paths. Perhaps, I thought, if I stared long enough I could imprint it on my mind. But no, four days after our first visit, I could only remember the vivid lines that described the church and that brilliant bluest blue. So I did want to return and take a photo that could ease my longing on a rainy winter day back home. This second visit to The Musée d’Orsay created a perfect set of bookends to our Paris stay.

The hotel where we were staying, Beaumarchais in Le Marais, had given us complimentary tickets to a river ride on the Seine. Not having used them as yet and despite dropping temps, we had decided we could ride the river and use our tickets if we caught the early evening cruise.

The d’Orsay was closing and we needed a place to restore our energy. We headed across the river to the Louvre but never got further than the submerged foyer that sits beneath I Pei’s glass triangular roof, but that was enough. Taking the escalators down, we found a small space on a polished wooden bench. Sitting amidst the cavernous beehive humming with people, cradling a warm cup of coffee, we were able to bask in the light of sunset above the Louvre and nestle down into its warmth, repairing our tourist weary bodies. 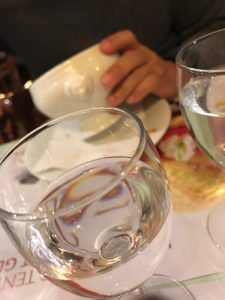 Energy restored we headed out with enough time for a simple dinner before we had to catch the boat. Underneath a scaffold and just the other side of Pont Neuf, we found a crêpe place with an online recommendation. Ducking in from the cold, we were surprised to see only one other couple. We were warmly greeted by a woman we took to be the proprietress and welcomed seats on the half balcony that perched three steps above the dining room. Just enough time. We perused the menu and although they were not prominently featured on the menu we decided upon the salmon crepe we had read about on trip advisor.

We waited. We waited for that nice woman to finally return. We ordered our crêpe and some wine. The wine came and then we waited. We waited as she chatted with the man behind the bar. We waited as an old friend came through the door and a small reunion took place. We waited as we realized we wouldn’t make the 7 o’clock ferry but maybe we still had a chance at the 8:30 departure. We waited as she chatted with the other couple, now paying their bill, now putting on their coats and leaving. Finally we leaned over the railing to politely inquire as to the whereabouts of our dinner. “O, Êtes vous prêt?” are you ready? Had we missed a cue? She hurried away. We waited. About 20 minutes later, a blast of cold air ushered in our waitress, hurrying in through the front door, hands full of plates. She swept over to our table and lay down our crêpes. They had materialized from somewhere outside in the dark and cold. Our limited understanding of French gave us to believe that somewhere down the street was a crêpe stand, a fire just for making crêpes. 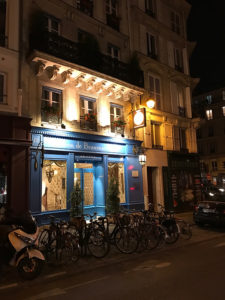 That if we had ordered anything else off the menu if would have come out of what appeared to be a very quiet kitchen, but that the crêpes were made “là bas”. We ate. It was good. We made out boat. We arrived back to our hotel tired and cold. We had spent five delicious days in Paris. We were baptized, a bit more accustomed to the sounds and customs of France. We were ready to travel to Versailles and to venture forth.

The next day we took a taxi to Versailles. We had planned on taking the train, but the concierge at the very friendly hotel where we stayed, advised us that by the time we took a taxi to the train and paid for two tickets to Versailles, a taxi straight to our hotel would be nearly as cheap and a lot more convenient. I was beginning to understand the ways travel educates you and how important it is stay flexible and keep an open mind. We were to learn many things in the upcoming weeks. But I’m not sure I’ll ever understand the crêpe that came in from the cold.