When we visited Jayme at her home in the Santa Cruz mountains, this is one of the songs she sang for us, answering an age old question, what happened to that cow?

After one of my recent blogs, Jayme Kelly Curtis made the following comment:

“I noticed on your blog it says that the uke club started meeting at Bocci’s. Actually, it began at Peter & Donna’s house, then went to the upstairs bozo room at 99 Bottles of Beer (just once), then the Harbor Cafe (several months), then Ideal Fish (many months – a year?), then finally settled into Bocci’s, where it found a permanent home. But you probably knew that. Peace, love and ukulele, Jayme”

I did know this Jayme but thanks for clarifying. I’d like to post a few of Julie’s photos from that first meeting at 99 Bottles and a few club member comments about that night. (More photos of that night are on the Nina Koocher Films facebook page.) 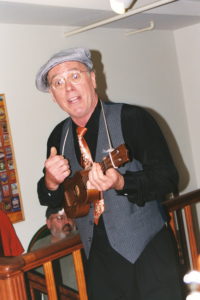 "It was so crowded people were sitting on the stairs. Who knew?" 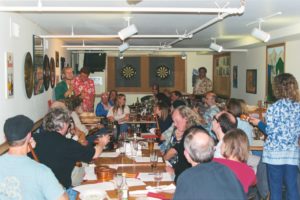 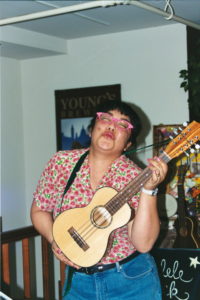 This is one of the songs Jayme sang for us when we visited her at her home in the Santa Cruz mountains.